What is video marketing?

Find out if using videos to advertise your business is worthwhile. 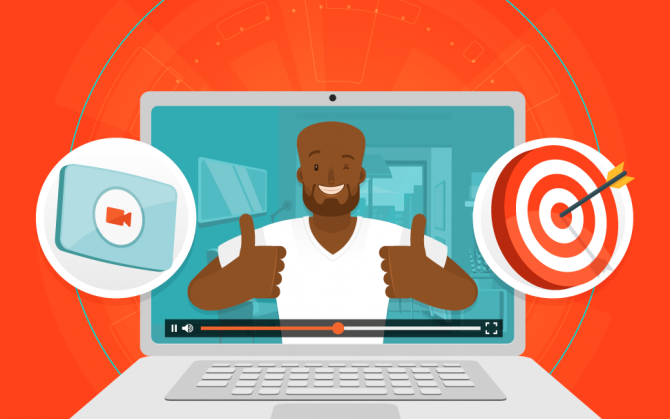 It’s not uncommon to find this subject being treated as a separate strategy, but basically any video in digital marketing, content marketing, ads or in a sales funnel is video marketing. It’s that simple.

So, if you still aren’t familiar with these terms, click on the links above to learn a little more about each subject and about marketing in general. You’ll understand more clearly how videos can fit into your planning.

For those who are familiar with the topics mentioned here already, let’s explore the general possibilities of using videos, so that you can better understand what it means to use them in your marketing strategies.

In addition, we’ll show you a few ad platform options.

We hope that this post also makes it clear that videos alone won’t solve the problem, nor it is always the best option, despite all the hype surrounding this format.

Why are videos so important?

This special attention to the subject is a result of how relevant this media format has become.

This is no surprise if we consider the technological evolution over the last 10 years.

It has become increasingly easier to produce and consume videos. Filming, editing and accessing this type of content from mobile phones has become commonplace.

With video, it’s possible to transmit a lot of information not only through the filming itself, but also by using audio, music, lettering, and animations, for example.

With all these benefits, it’s easier to attract the attention of viewers and consequently, engage them.

Moreover, as humans, we naturally interpret speech intonations, facial expressions and body language. The personality of the person presenting the video becomes much more evident.

Moving images also provide, in addition to textual information, an infinity of other signals that communicate with the viewer, ranging from the clothes being worn to the scenery presented.

It’s no wonder that it’s believed that by the end of the year, 80% of web traffic will consist of videos – even if this information leads to somewhat misleading interpretations, since video files (especially high resolution) are much larger than static images or texts and therefore, require a larger bandwidth.

So, this doesn’t mean that by then we’ll be consuming videos 80% of the time. But, in any case, they’ll be increasingly more present.

So, should I focus on video marketing only?

After all, with so many advantages and an increasing presence online, should videos be a priority in your communication strategies?

Should you invest in a better camera right now?

Should you abandon your blog and focus on YouTube?

Well, that’s not the case.

On the one hand, if you don’t make videos, you’ll be missing out on countless possibilities.

We won’t go into detail because if you’re interested in the digital market, even if you’re just getting started, you certainly consume a lot of videos every day and you’re already aware of the power of webinars, video classes, sales videos, video ads, vlogs, etc.

What many people don’t realize is that in marketing, the message, the moment and the place where it’s inserted is still what makes all the difference. It doesn’t matter if we’re talking about videos, texts, audios, static images or face-to-face communication.

In other words, your video marketing won’t be effective if there’s no clear purpose, if it isn’t targeted to the right audience and if doesn’t have a good text – more specifically, a good copy and content (script) –, even if the video is extremely well-produced with beautiful images and great presentation.

Why shouldn’t I use videos all the time?

Traditional text isn’t being replaced by video just yet, but it’s becoming more integrated and adapted.

It’s also worth mentioning that, depending on the type of communication and user behavior, videos might even generate poor usability, because, despite its reputation of facilitating the consumption of information, this characteristic depends a lot on how and where it is presented.

Imagine if your favorite news website replaced most of its written news with videos.

It would surely be quite inconvenient not to have the option of browsing through the page and choosing which article to read.

Depending on the duration of the content, I assure you that this would also be an obstacle, since in order to watch videos we need more internet speed and sometimes, a specific time and place if the content depends on audio.

This is the reason why sales videos usually don’t appear at the top of a page.

The best strategy might be allowing readers to quickly read the general information first, so that they can situate themselves and make their own decisions, clicking on a button or scrolling further down the page.

After these actions, you’ll know that users are more likely to focus and your video will have a much better chance of successfully holding their attention.

Another reason not to invest in videos only and continue working with other media is that, in terms of SEO (search engine optimization), videos are at a disadvantage when compared to text, especially blog posts.

Google’s search engine works much better and in a more specific manner for written rather than video content.

Although there’s an integration with YouTube and the platform has improved a lot in this area, using tags, descriptions, subtitles, titles, and especially, the capacity to interpret the algorithm, texts still rank better.

What type of videos should I create?

Now that the importance of texts for the success of video marketing is clearer, you can understand why in most cases you don’t need to worry so much about the quality of the video production, but specifically about the images.

Not that it doesn’t make a difference. After all, the better produced your video is, the better the chances of making it attractive.

The point is that one of the major differences between videos on the internet in comparison to TV or movies is that on the web, a more unpretentious format has its place and can even simplify the process, allowing for more videos to be created in a short period of time.

In certain cases, production simplicity might even convey a certain authenticity and spontaneity.

If you follow YouTube channels of influencers or brands, perhaps you have noticed that the most successful don’t always have the best images.

However, as with everything related to marketing, this will depend on the audience and on a variety of factors, such as media support.

Thus, a YouTube vlog can look amateurish, but the sales video of an expensive product probably shouldn’t.

With this information at hand test different formats, styles, and proportions. And always analyze the metrics provided by the platforms.

When you map out all the possible options, it becomes clear that making videos, albeit simple, takes time, right?

So a good tip is to try to create a recording schedule, shoot several videos at once, and then, edit them slowly.

Another great time-saving strategy and create a multitude of sub-products is to think about a longer video with richer content. It can consist of an interview or an “out of the ordinary class” for example.

With this base material, you can use the audio for a podcast, highlight phrases and post them as quotes (as texts or images) and especially, you can separate short excerpts for Instagram and other social media.

Is it possible to create an ad with videos?

Despite so many possibilities that have emerged in recent years, especially in content marketing, traditional ads are still alive and kicking.

To explore this subject a little further, let’s focus on YouTube, which basically provides you with 3 options:

These are the standard YouTube ads. You only pay if a user interacts with the video – for example, clicking on a CTA –, and also when a user watches more than 30 seconds or the entire video.

These ads may appear next to search results and in the middle of related videos (Discovery ads).

There’s also the option of displaying them before a video starts (In-Stream Ads). In this case, users have the option of skipping the ad after 5 seconds.

These are the ads that users cannot skip.

They can be placed before, in the middle (if the video is longer than 10 minutes) or at the end of a video.

The duration of these ads is between 15 and 20 seconds.

These are those short, 6-second ads that run before a video. They can’t be skipped by users.

We hope that this information will provide you with a solid base to take advantage of marketing videos, and if you have any questions, be sure to leave us a comment below.

Other posts by Luciano

Copywriting: how to create texts that sell?

Anyone can be a copywriter. Learn the secrets to create compelling texts.

IGTV: what is it, and how does it work?

All you need to know about this Instagram feature.

Check out our awesome tips to optimize your LinkedIn profile and take advantage of everything this network has to offer!